Lot is originally from the Netherlands and moved to Boulder, CO in March 2014, to join her husband. She completed her PhD at the department of Biological Psychology at the VU University Amsterdam in February of 2013 and after graduating, worked as a data manager at that same department. In her free time, Lot likes to go rock climbing, running, and snowboarding.

Paula is a recent graduate of the University of Rochester in upstate New York with dual majors in Statistics and Psychology. She was raised in Steamboat Springs, Colorado, and for that reason takes a great interest in the outdoor recreation industry. In her free time she enjoys snowboarding (obviously), baking, traveling, and playing guitar.

A recently released report from the Colorado Department of Revenue shows the marijuana market to be larger than initially predicted, and that the vast majority of marijuana sold at retail in mountain communities is purchased by out-of-state visitors.

The report estimates that, based on the first three months of legalized recreational marijuana sales in 2014, the annual demand for marijuana in Colorado is about 130 metric tons – much higher than earlier predictions. These figures include a demand of 121 metric tons by in-state residents and 9 metric tons by out-of-state visitors.

Of particular interest to those who watch mountain community issues, the report estimates that 90 percent of the marijuana retail sales in selected mountain counties (Summit, Eagle, Clear Creek, and San Miguel) were attributable to out-of-state visitors. In the Denver Metro area, 44 percent of marijuana retail sales were attributable to visitors. (Both figures exclude medical marijuana sales and “grey market” consumption.) The report does not postulate whether these tourists, to either the mountain communities or Front Range, made the trip to Colorado to purchase marijuana, or whether they were visiting the state anyway. The report does anticipate that marijuana sales to mountain community visitors will increase as more jurisdictions begin permitting retail store fronts.

I-70 Traffic Analysis
Using data from the Colorado Department of Transportation, RRC analyzed Saturday west-bound traffic at the Eisenhower Tunnel. Data from the last Saturday in January and July were collected from 1996, 2004, and 2013/14, in order to represent how traffic patterns differ between winter and summer and over time. While winter and summer bring about different patterns with regards to when peak hourly traffic occurs, they are similar in the sheer volume of traffic generated. A few observations from a recent analysis of include: 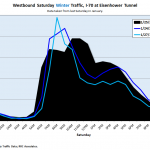 Compared to 2004 and 1996, winter peak traffic moved to later in the morning. Furthermore, the peaks are not so sharp, suggesting sustained traffic throughout the entire span of morning hours. 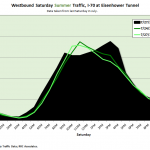 These data points generate questions such as:

How does traffic along the I-70 corridor affect not only Colorado residents, but destination visitors who may not leave for the mountains from DIA until late morning?

Will summer travel be impacted by crowded conditions and will new strategies emerge for dealing with slowdowns and stoppages on I-70?

How will future planned improvements, such as the addition of an eastbound toll lane at the Twin Tunnels, change traffic patterns along the corridor?

RRC continues to monitor I-70 traffic patterns and tracks perceptions and use patterns of highway users. These studies have tracked the reported “strategies” of Front Range residents for dealing with highway conditions during winter. For more information, please contact RRC.

When the Snow Melts

Abundant snowpack in the Rockies this past winter has meant above-average water levels across most of Colorado. Abundant flows have created a surge in rafting participation this summer, and will likely mean a longer float season. Unfortunately, high water levels in the early season have also been linked to the deaths of more than a dozen people in Colorado so far this year.

According to David Costlow, director of the Colorado River Outfitters Association, while river users need to exercise caution, they should be trusting of commercial river outfitters who know when and where to redirect rafting routes to calmer stretches of river.

RRC Associates continues to conduct an intercept survey research program on sites along the Upper Colorado River, to better understand river users’ perceptions and experiences. In particular, the research program lends insights into the usage patterns of private users as compared to commercial users.

Our January newsletter contained an article discussing the role of the Winter Olympics in boosting snowsports participation. The article noted how past qualitative research produced by RRC documented a positive impact of the Olympics on ski areas and skier/rider enthusiasm for the sport. The 2014 World Cup begged a similar question: What is the effect of this event on participation? Recent articles seem to suggest that the World Cup does produce more interest and participation in soccer. Major League Soccer attendance has surged, the American audience for the World Cup has more than doubled between 2006 and 2014, and registrations for youth soccer have spiked in certain locations.

Particularly interesting is how much the World Cup resonated among Millennials. A recent Pew survey found that 24% of those aged 18-29 followed the World Cup closely (compared to 17% aged 30-49, 16% aged 50-64, and 9% of those 65 and over). Those in the 18-29 cohort were much more likely to follow the World Cup than other leading news stories in late June. Yet another indicator of the World Cup’s popularity among youth: the final match between Germany and Argentina broke Twitter’s tweet-per-minute record.

Rental by owner sites such as VRBO or Airbnb have become a topic of increasing attention and interest in the travel industry. With Airbnb operating in 34,000 cities, 190 countries, and hosting over 160,000 listings, hoteliers are increasingly wondering how the growing popularity of these sites may affect their bookings. A Boston University study found that in cities where Airbnb has a major presence, revenues at budget hotels have decreased by 5 percent. Lawmakers and lobbyists have responded by bringing Airbnb to court. And although Airbnb has recently run into legal trouble in a smattering of locales, a major rebranding effort by the company shows that Airbnb has no intention of slowing down.

RRC analyzed travel surveys we’ve conducted recently in both summer and winter to get a sense of the vacation rental by owner trends in some of the country’s top mountain destinations. While the analysis is preliminary, the evaluation of booking method among visitors at several destinations shows that usage of sites like VRBO, Homeaway, or Airbnb ranges from between 3 and 13 percent. Interestingly, usage in summer is generally lower than in winter, perhaps because many of these destinations have more affordable hotel room rates in the summer months.

We are excited to keep a finger on the pulse of this evolving trend.

From the Data Desk: Seasonal Enplanements at Resort Airports

Trends in the U.S. airline industry are generally upbeat. In 2013, the industry had its fourth consecutive profitable year. Enplanements have increased each year from the prior year during this period (2010-2013) as well. While post-recessionary trends seem promising on an industry-wide level, how are some of the smaller, regional airports that service mountain resorts faring? Enplanement data suggest a mixed picture. 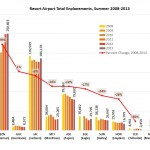 Summer: Over the past six summers (2008-2013), enplanements at Bozeman have grown strongly, while enplanements at other airports have generally remained below pre-recession levels, and have in many cases experienced ongoing declines. Encouragingly, however, Bozeman, Jackson, Montrose and Eagle saw increases in passengers from summer 2012 to summer 2013. 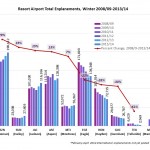 RRC conducts visitor surveys at many mountain resort airports. The results typically illustrate that airport users are among resorts’ most valuable customers, with comparatively long stays, high levels of second homeownership, very high incomes, and high levels of repeat visitation and likelihood of return. As such, notwithstanding the challenges of attracting flights, building and maintaining quality local air service remains a key priority for affected destinations in the mountain resort industry.